Pachinko Online is an immensely popular game in Japan, but in recent times has been accepted in several other countries. Pearl Pachinko is similar to regular pinball. A stream of pearls is tossed out into the playing field, and then they move between various obstacles that change the pearls' trajectory. For simplicity, these pearls are usually referred to as balls. In addition, a mini slot is installed in the playing field. A successful launch of the mini slot wins the jackpot, which is the biggest possible win in our online pachinko.

BetVoyager features our conventional online pachinko and a version with no house edge. 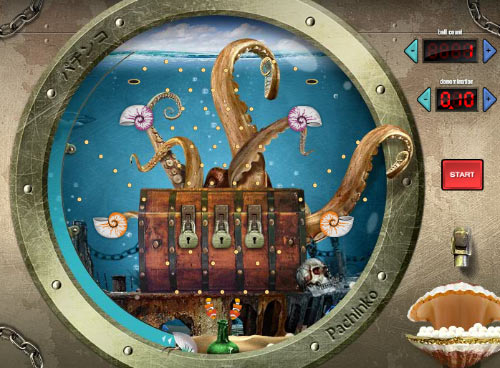 Note. The payout indicates the number of balls. The amount of money is calculated by multiplying this number with the value of the ball.

In our No House Edge version of online pachinko, jackpot pays at the rate of 57.3.

While moving between the various obstacles, the balls usually fall down off the playing field, which does not result in a win for the player. However, a few balls fall into winning pockets shaped as four shells and a bottle. If this occurs, the player receives a payout in accordance with table below. The according amount of money is immediately transferred to the player's account.

The two lower shells are open at all times. Balls that fall in them will result in a payout. The top two shells can be either open or turned over. When a shell is turned over, the balls bounce off it and continue to move. The position of a top shell changes each time a ball falls in the opening located above the shell.

The bottle is open at all times. However, the frequency that balls fall in the bottle depends on the position of the two fish hanging above the neck of the bottle. The fish can be in two positions: either making it more difficult or simpler for a ball to fall in the bottle. The position of the fish change each time a ball falls into the skull's eye socket located in the lower-right hand corner of the playing field.

The number of balls in online pachinko is indicated in the "BALL COUNT" field. This number is set at 100 at the start of the playing session. The player can change this figure with the proper switch and choose a desired number from 1 to 10000.

The value of the ball is shown in the "DENOMINTAION" field. This number is set at 10 cents at the start of the playing session. The value can be changed with a switch from ¢1 to €1.

The balls are launched by pressing the "Start" button. At that moment, an amount equal to the value of the balls in the game is deducted from the player's account.

The balls are tossed out in turns from the shell below the playing field. The "BALL COUNT" field shows how many balls are left before the end of the game.

If the player launches more than 100 balls, he will then have the ability to prematurely abort the game. Upon being pressed, the "Start" button will turn into a "Stop" button. If the player uses this button, the launch of balls will be interrupted. The value of the balls that have not been played will be returned to the player's account. Nevertheless, please note that the game does not stop immediately after pressing the "Stop" button. A certain number of balls will still appear in the game, but in no case will this number exceed 100.

As indicated, the minislot is launched when a ball falls in the bottle: the locks that are hung on the trunk begin to rotate. Situations may arise where the minislot launch has not concluded, yet another ball falls into the bottle. The next launch will begin immediately after the previous one ends. In other words, the new minislot launch will be slightly delayed. If several balls in a row fall in the bottle, the delayed launches can accumulate. Each time that a delayed launch occurs, a small crab will appear on the playing field. He can be seen next to the trunk. This will help the player track the game play.